Alchemy 1 has been based in Mackay for the last month. We left her at the Mackay Marina for two weeks while we visited family down south; welcoming the newest Hutchison, Lucy, checking in at our other home in Bairnsdale, and spending a few days in Narooma. Then it was back to the boat to wait for good weather to head north, intersected by George's quick trip to Cairns for a meeting.

Suffice it say that the winds were not exactly favourable, and we decided to address a couple of maintenance issues, so we are still in Mackay. However, the sou'easters have kicked in and we are ready to spread our wings someday very soon.

In the meantime, we made the most of the area, doing a couple of short trips to the islands near Mackay, and enjoying some of the local culture. Whenever you travel, you have interesting encounters and see curious things, so we have included a few below:

These islands (marked on the map below) are within 3 hours sail from Mackay, with nice anchorages and perfect for a weekend stay. They are the most southern extent of the Whitsunday island chain.

The islands are all National Parks and un-populated, except Keswick, for which a developer had grand plans before they ran out of money.

There is a small airstrip at Keswick, so tall-masted yachts have to take care not to anchor right at the end of the runway. Keswick is also known for its population of Caucasian honey bees (brought to the island in 1989) and kept isolated from mainland bees to avoid disease. They sell honey at the Keswick Kiosk; it is very dark and strong-tasting due to the aromatic flowering vegetation on the island. The anchorage is in Egremont Channel, a narrow waterway between the two islands (Keswick and St Bees) and a very strong current runs through it as the tide rises and falls. It is a designated "whale migration zone" and we watched a mother and calf swim along it on our last visit. 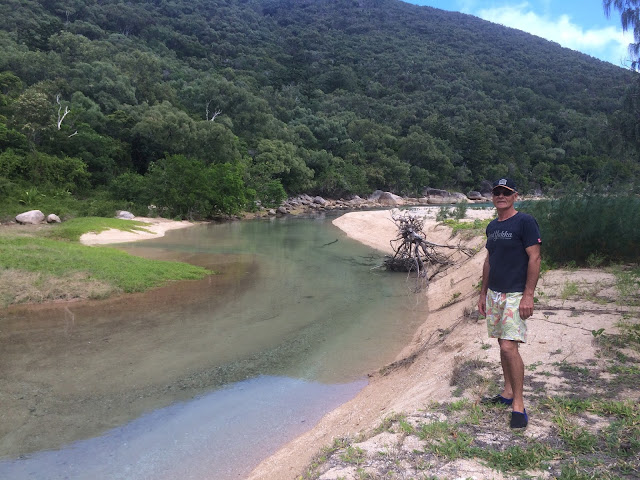 Scawfell and Keswick gave us opportunities to disembark and walk along the beach, enjoying the butterflies and birds, and other wildlife. 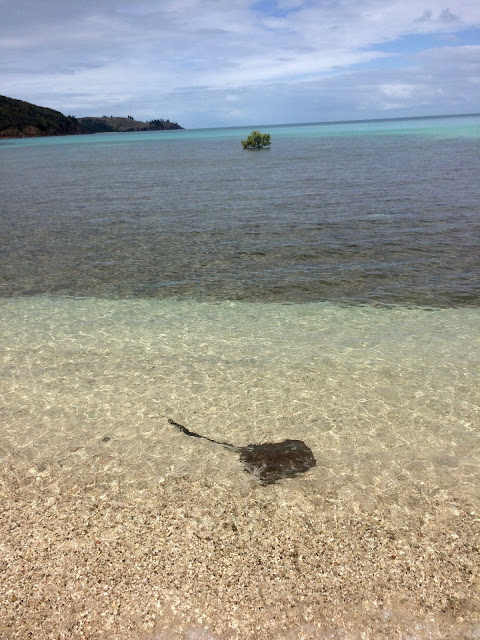 The mangroves on Keswick were home to large numbers of stingrays feeding right up to the water's edge. 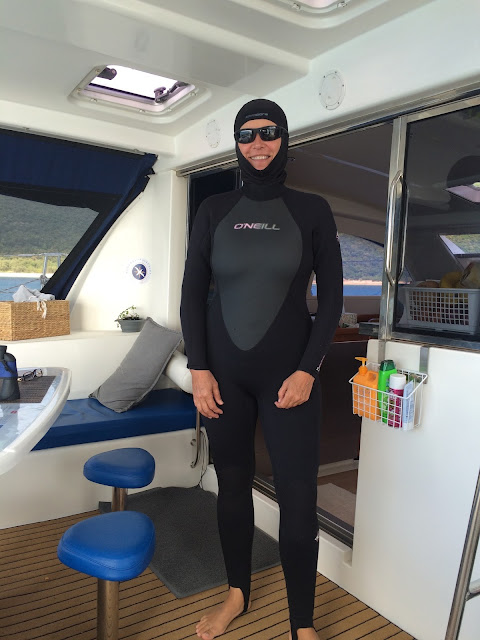 Unfortunately the water was rather murky, so our dive trips did not last very long. And seeing as getting kitted out for a dive is almost as exhausting as getting ready to go snow skiing, it often did not seem worth the effort. We are hanging out for warm weather and clear water as we head north! 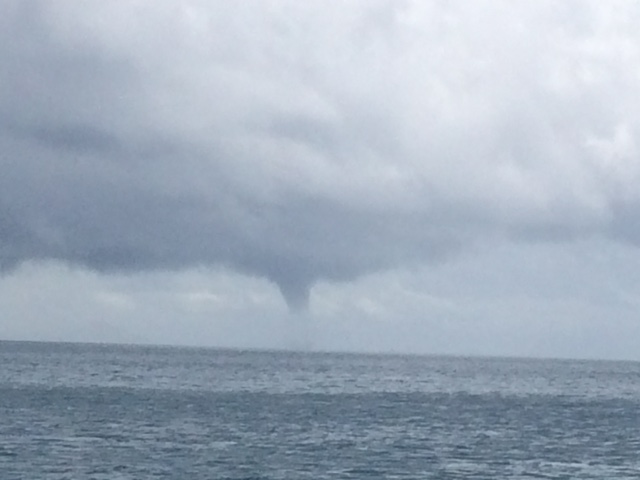 A note on the weather; it has been quite cold and cloudy, with strong winds coming from odd directions and occasional storms with unseasonal rain. This is unsettled weather is supposedly to be expected as we head into a La Nina weather cycle. We watched with interest from our anchorage at Scawfell Island as this brief storm developed. We did see swirling spray at its base, but it never became a full water spout. 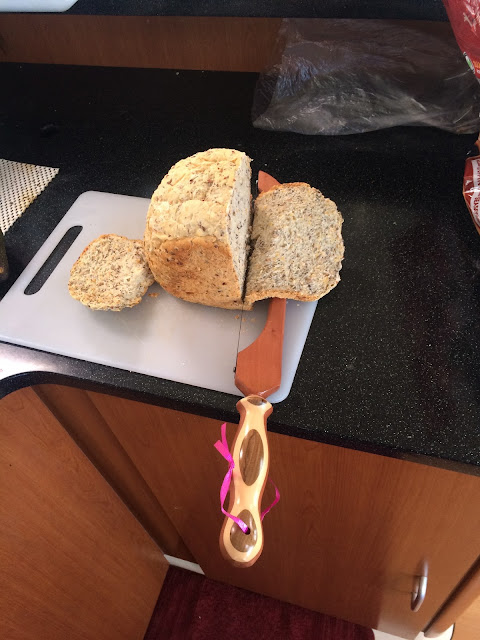 A cruising contact recommended putting a bread maker on board (which we received as a wedding gift) and it was excellent advice. Nothing like fresh warm bread at the end of a day's sail. And the bread knife recommended by Judy is also a winner. 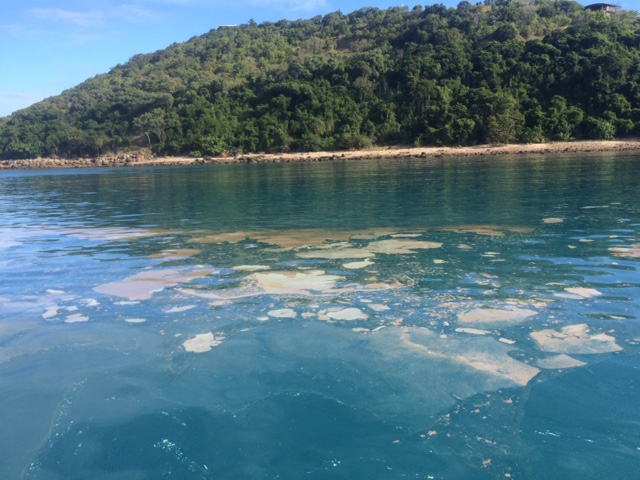 It's not all rum and roses, though. We came back to the boat after a sweaty hike, eagerly awaiting that refreshing dive into the water, to find we had been visited by these huge rafts of evil-smelling slime. We checked our holding tanks, but they weren't responsible. I looked around for a guilty whale, but there were none nearby. We speculated it might be coral spawn; a rather revolting but ecologically acceptable explanation; but it was the wrong time of year. On closer inspection (seemed like a good idea at a time) it was composed of clots and tendrils of muck - which didn't help differentiate the likely cause. I fell back on the trusty Google search when we got back to port and found that they are formed by the algae trichodesmium. They are quite natural and not a result of global warming, fertilisers or other forms of pollution, or even Tony Abbott's government. They aren't even really toxic, although I would not swim through them by choice. They are simply ill-favoured colonies of organisms that float in huge scums on the oceans' surface, drift onto beaches, dry out, then slough back out to sea and smell really bad.

The other, more attractive, ocean denizen we keep seeing regularly is the humpback whale. We came upon this one just off Keswick. Humpbacks are black on top and white beneath, so the only way we should see the underside of her flukes is when she sounds (dives deeply). This whale was lying motionless on its back with its tail just sticking out of the water. To put it in perspective, the flukes are about 15 feet across. It did this for several minutes (we thought it was a boat or some sort of debris before realising it was a whale). It was such strange behavior that we thought the whale might be sick or even dead. As we got closer, we saw a small calf surface next to its mother's flukes. 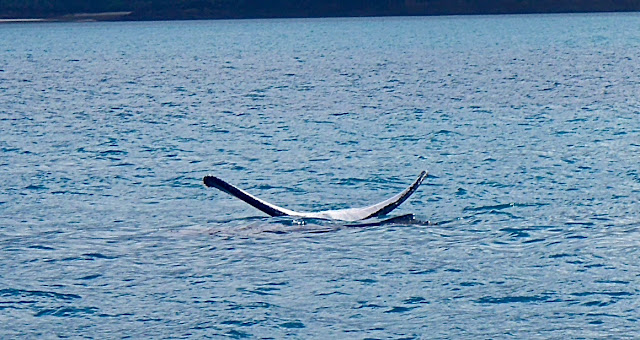 It was shaping up to be a very sad situation, but to our delight, eventually the mother whale slipped below the surface, righted herself languidly and came back up to blow. Having confirmed that she was alive, we made a quick exit, firstly because we did not want to disturb them and, secondly, because it is against the law to approach to within 300 metres of a whale calf. On further reading, it seems that this "flukes-up" behaviour, while rare, is being seen more commonly in Australia. It is a way of nursing the calves, and whales appear to learn it from one another. Not surprisingly, it often leads to the Coast Guard or Parks and Wildlife being notified of a distressed or dying whale by concerned bypassers.

A highlight of our time in Mackay was our visit (yesterday) to the Mackay Beach Races. This was, admittedly, much more about the party than the horses, but we enjoyed the spectacle of both. The races can only take place during low tide, and the fields are small, but they are fun to watch.


That's all for now; hopefully our house batteries will be installed this afternoon or tomorrow and we will soon join the migration of catamarans cruising north!

Posted by Geraldine B Hunt at 21:44 No comments:

Our Journey to Date

Our journey to date has taken us from Manly Boat Harbour to Mackay, with many stops along the way, and the company of family and friends. Here are a few highlights:

That's all for now; more to come as we continue our journey north and learn more about the wonderful cruising coast of QLD. 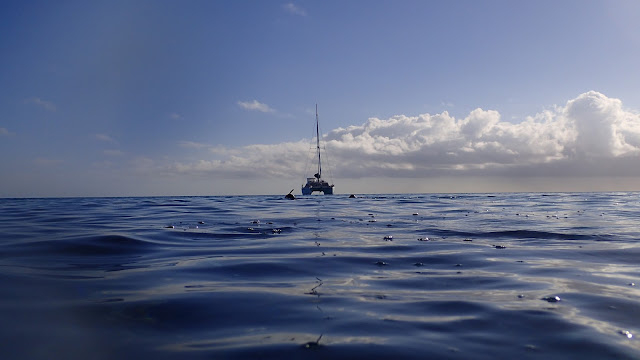 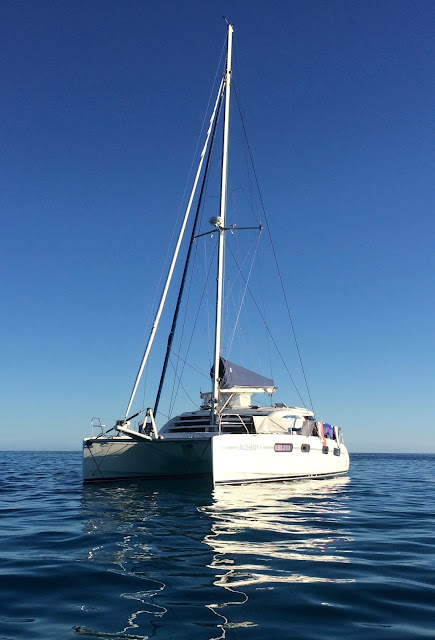 This is the first post in our new blog, Adventures of Alchemy I. In this blog we will share the ups and downs, the rainbows and squalls, of living and cruising on our Leopard 46 catamaran.

Our journey started in Mooloolooba last December, when we saw Alchemy I for the first time (made an offer and subsequently purchased her). It continued in Coomera with a marine inspection and a month of upgrades, to Manly (QLD) where we replaced the rigging, fitted a new prodder and screacher and added awnings out the back to make everything complete. Finally, 7 months after we signed the papers, we were ready to set sail ...