How To Find Your Way To Tonga 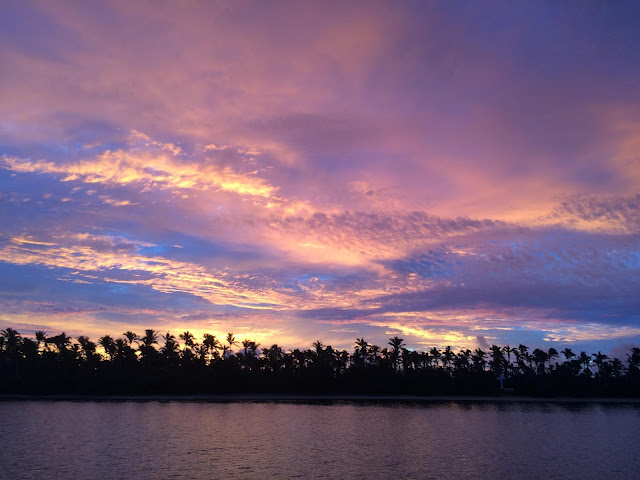 People first arrived in Tonga roughly 3000 years ago. They were the Lapita, who sailed down from Taiwan and the Philippines in huge outrigger canoes that could hold up to 200 people, along with pigs, dogs and chickens.


When you look at it, not so very different to the yacht upon which we arrived ... 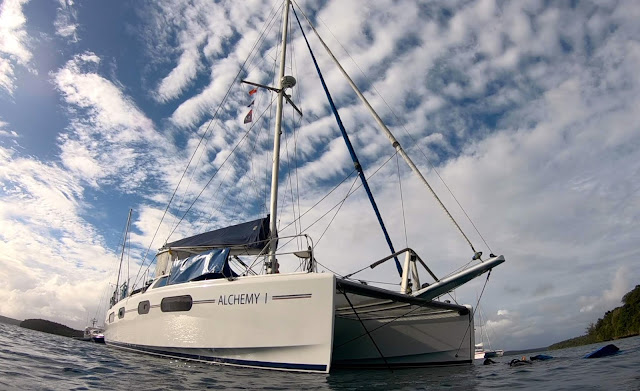 Of course, the ancient Lapitians navigated using the stars and the sun, the currents and the behaviour of animals around them such as migratory birds, whereas we used our chart plotter.

Looking at the yellow track, it might seem that we got lost on our way to Tongatapu but it was all about the weather. The prevailing winds kept trying to push us west to Fiji and eventually we lost the battle and had to take the sails down and motor the rest of the way.

There is another race of ancient seafarers that migrate to Tonga and, to this day, nobody knows how they manage to find their way. They are the humpback whales. 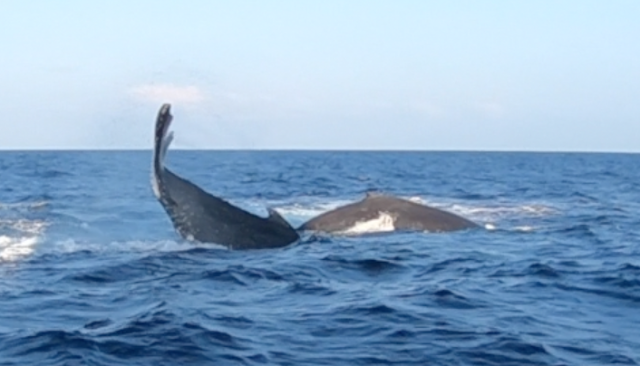 During the winter, Humpback whales travel in large numbers to Tonga, where they give birth, mate and allow their calves to grow strong enough for the long swim back to the Antarctic for the summer feeding season. Like most animals with romance on their mind, they aren't very interested in anything else and hence yachts sometimes have to take avoiding action, as we did when this pair of duelling males popped up just in front of us.

These males were engaged in a behaviour known as "tail lobbing". They kept at it long after we sailed past them and it seemed for all the world as if they were locked in a competition to see who could make the biggest and loudest splash.
Although the means by which the whales navigate is not really known, we did notice that the whales seemed to congregate around seamounts, which are shallower areas where the ocean floor thrusts upwards. 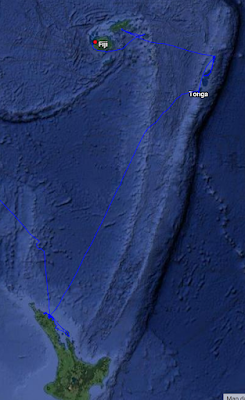 Our track from New Zealand to Tonga is shown in light blue. This satellite image also shows the ridges and troughs in the ocean floor that arise due to undersea seismic activity. The humpback whales seem more common near the shallow sea-mounts and it is tempting to think they might be using these features for navigation. 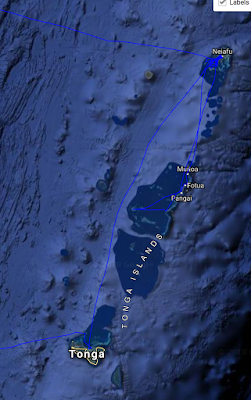 Once they get to Tonga, the whales find a huge and protected network of shallow lagoons and channels.

Scientists continue to research this migration, which is the longest of any animal on the planet. Here is a link to a recent report: How do whales navigate?

There are three main island groups within Tonga; Tongatapu (the south), the Ha'apai (Pangai, middle) and Vava'u (Neiafu, north).


We cleared into Tongatapu and waited for some other yachts to arrive. We were signed up with the Sail Tonga Rally (Island Cruising New Zealand), but in the end we did not travel with them as it did not suit our timetable.

The government laid down moorings in one of the most popular bays, Port Maurelle, which made securing ourselves safely in the deep water easier. 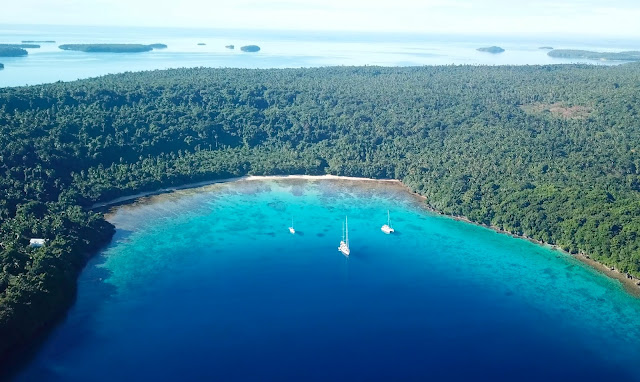 The water in Tonga is known for its clarity and our early anchorages did not disappoint. 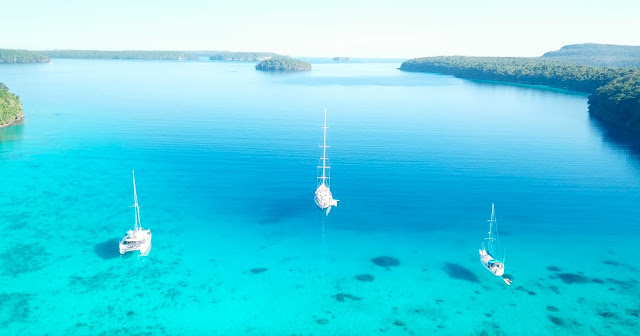 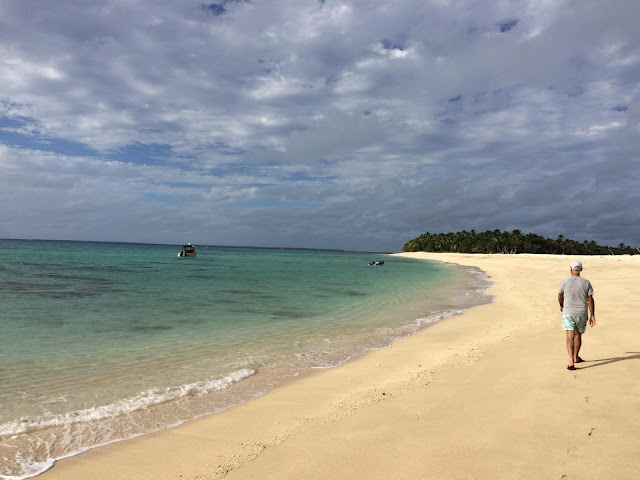 One of the joys of travelling to another country is meeting the local people and learning more about their culture and cuisine. We dropped anchor in a protected lagoon next to an island occupied by a single Tongan family. George and our friend, Geoff, were soon helping to repair David's outboard engine and runabout.


In return, David took us to Church, and invited George to a Kava ceremony.

I made friends with a small boy who was captivated by my mobile phone. 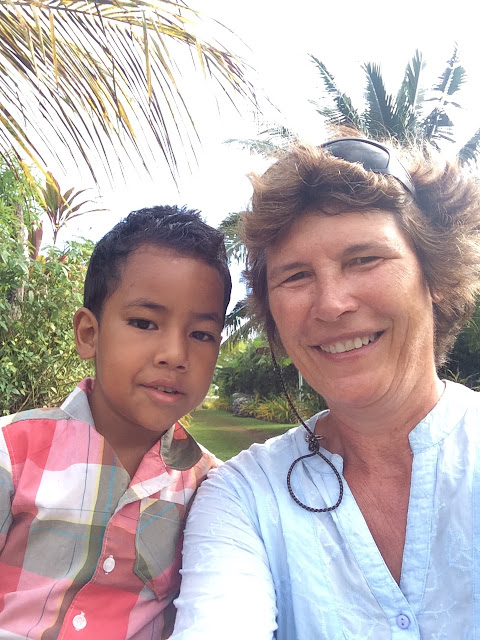 All land in Tonga is owned by the King, but people have long-term right of occupancy, so David, his wife, Hika and their 11 children were following the tradition of many generations on their own island. Hika was a one-time Chef and we were invited to a Tongan feast, complete with suckling pig (presumably a descendent of the pigs that came with the Lapitas on their wooden canoes). 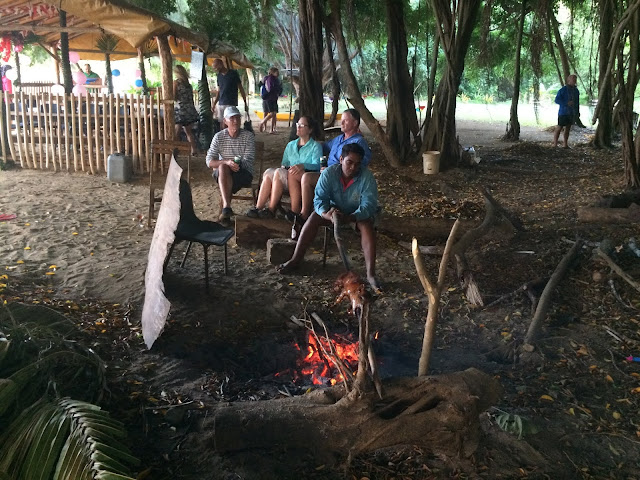 There are many pigs in Tonga. They free-range but are called in at night and they seem to know where they are supposed to go, although it was never apparent to me.

After the feast, David, Hika and their daughters sang for us.


Our friends, Geoff and Anne, joined us for two weeks as we explored Vava'u. 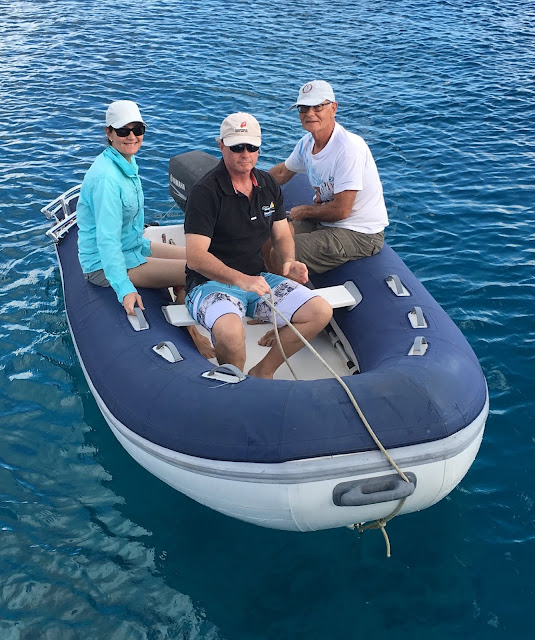 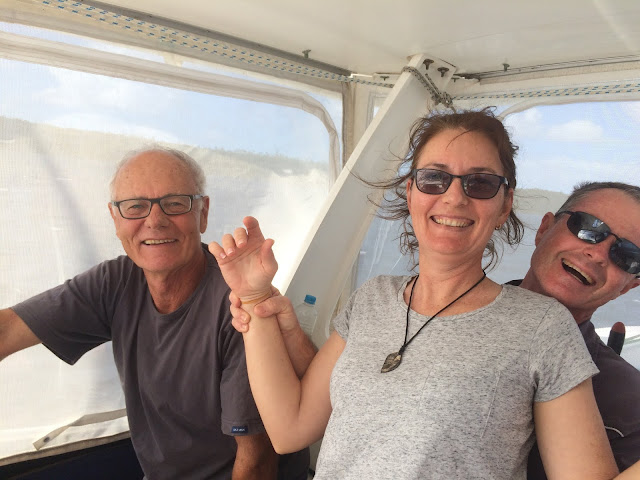 Amongst other things, we visited the local market and discovered the versatile breadfruit. A spongy, dense, fruit, it became notorious when Captain Bligh fell victim to a mutiny on his ship, the Bounty, during an expedition to transport breadfruit from Tahiti. Curious to find out why breadfruit had been so prized, we bought one and began experimenting with it. 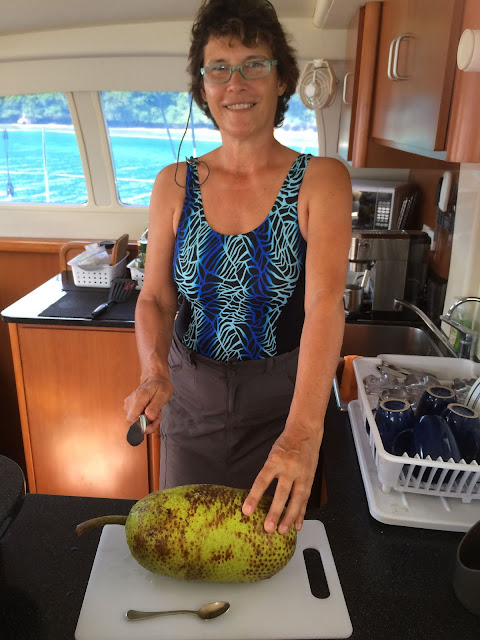 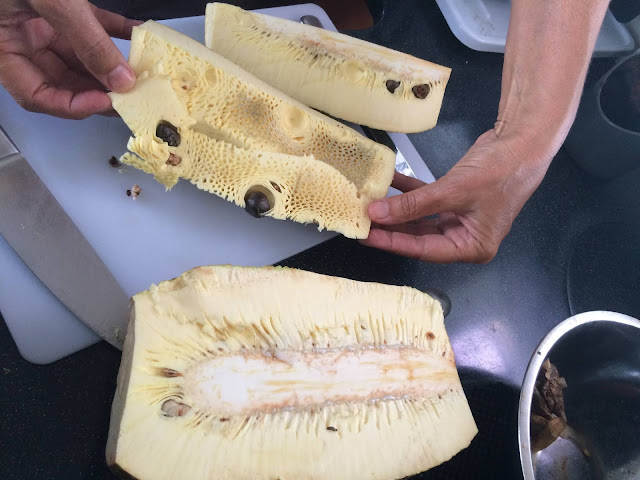 Once cut, you can see why people think it resembles spongy bread, and it has a dainty, sweetish smell that could be likened to fresh bread if you have been at sea for some time. I mean, if sailors could confuse sea cows with mermaids, then anything is possible. 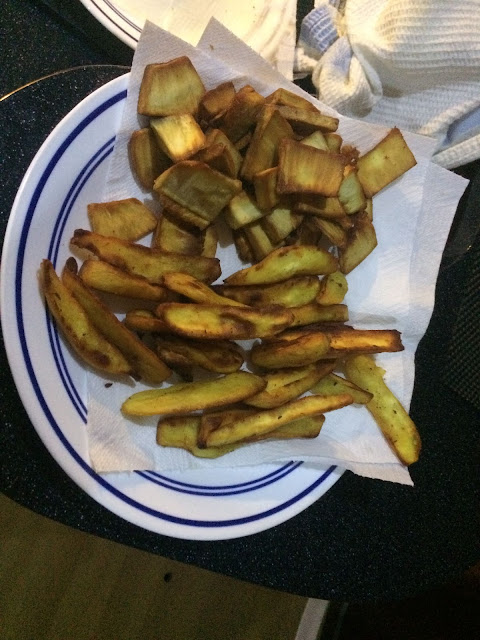 We asked the women at the market how to cook breadfruit and they said, "Chips". It turned out that they said "Chips" for just about everything, but the breadfruit chips were surprisingly good. We also added it to a vegetable curry. It has high levels of Vitamin C and calcium, and about half the carbs of potatoes. A winner, really. 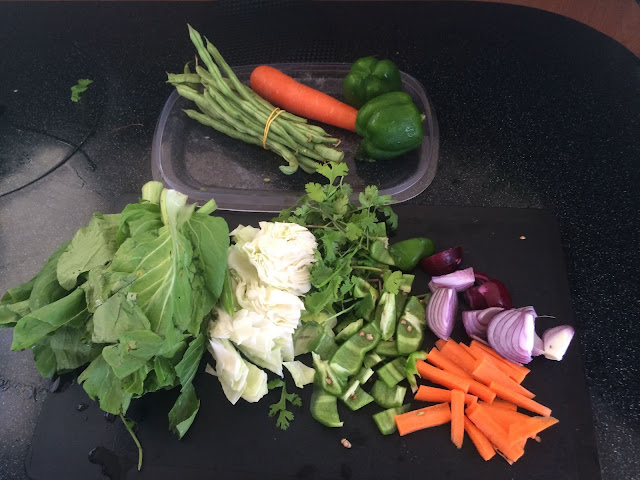 It was possible to get a lot of fresh vegetables at the market, but you had to get there early. It took me two weeks before I found fresh beans. The green leaves on the left are Island Spinach, for which I never really developed a taste. 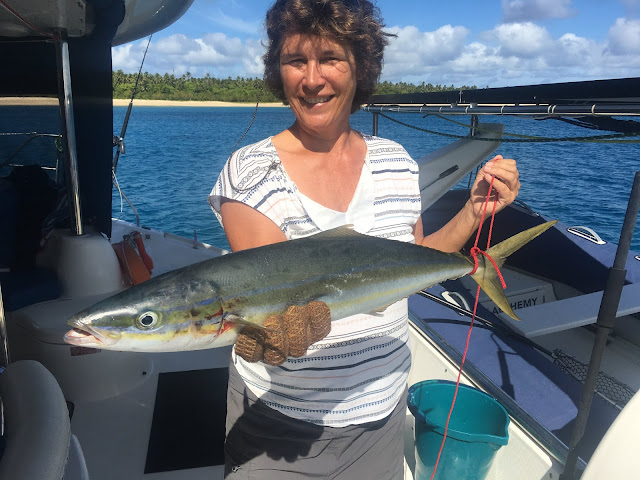 We were spoiled for fish in New Zealand's Bay of Islands, so Tonga did not stack up especially well, but this Rainbow Runner was among our successes and proved very similar to Kingfish, which is not surprising because it is pictured just below the Kingie in our fish identification book.

While Geoff and Anne were with us, we searched for and eventually found the famous Mariner's Cave, that you can swim into by diving 2 metres down under a ledge of rock. It was one of the highlights of our time in Vava'u.

There were, as usual, boat repairs to be done, and we were hauled out at the Boatyard in Vava'u for a week. 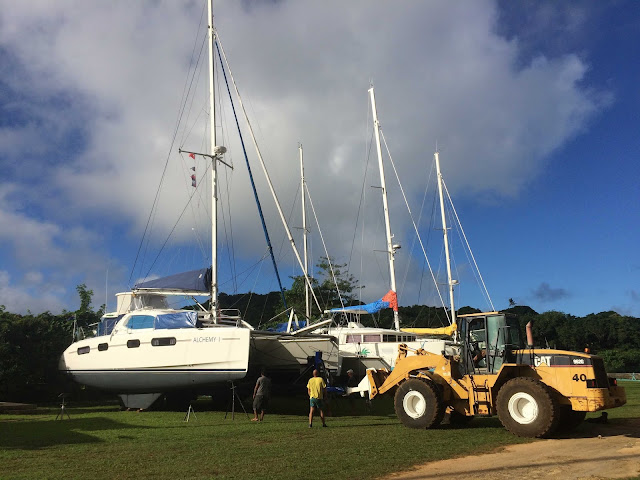 George turned the stone fence behind us into a work bench and with a little assistance from the locals he replaced our leaking water and oil seals, and did some maintenance on the cone clutches and gear boxes. 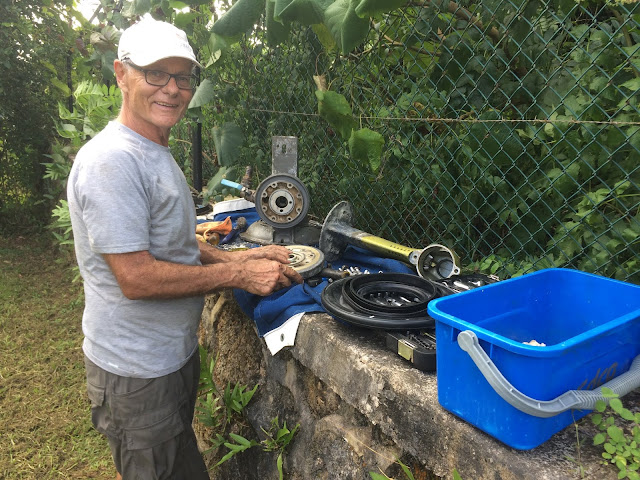 Then we were back in the water and ready to move onto the next adventure.

Posted by Geraldine B Hunt at 22:02 No comments: