One Thousand Miles to Go 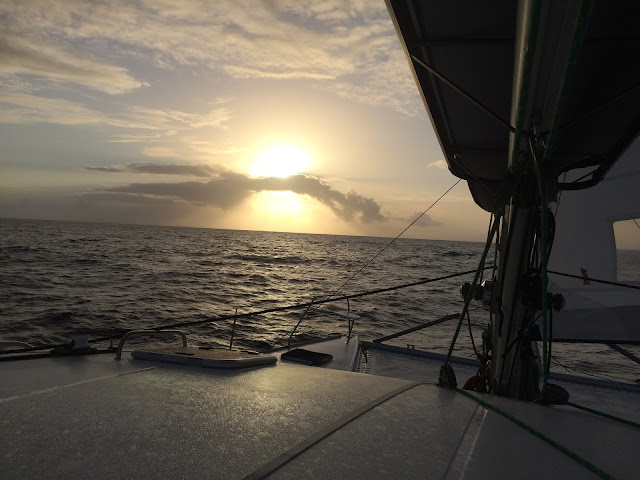 When sailing, distance is measured in nautical miles. One nautical mile is roughly 1.15 regular miles, and 1.8 kilometres. The distance from Noumea to Opua, in New Zealand's Bay of Islands is close to 1000 nautical miles, or 1800 kilometres. We needed to be out of the cyclone zone by December 1st, so in late October we began looking for our weather window.
The trip would take at least five days, and we needed to time our departure from Noumea carefully. It was unlikely that we would have favourable weather for the whole trip, because high and low pressure systems are continually moving across the Tasman ocean, with fronts and troughs in between them, so the chance of encountering  either head winds or storms at some time during the trip is quite high.
Speed on a boat is measured in knots; one knot = 1 nautical mile per hour. Alchemy 1 travels quite fast for a cruising boat (we average about 180 nautical miles per day, and do 200 miles on some days) so we were in a good position to slip in between fronts. After a couple of weeks of discord, the weather forecasts lined up to suggest that November 2nd was the day we should leave. We would have to negotiate an easterly wind to start, but we should have a strong northerly for the last part of the trip The compromise was that we would encounter a weak southerly about mid-way. All the advice we found suggested that we should time our voyage so the southerly passed before we got below 30 degrees south, because the storms tended to be more severe the further south you were.
So our crew for the voyage flew into Noumea, we did our last checks and repairs, filled the tanks with fuel, and set off on November 2nd.
This is what our final track looked like, as we plotted our course so as to have to wind on the beam or coming from behind. 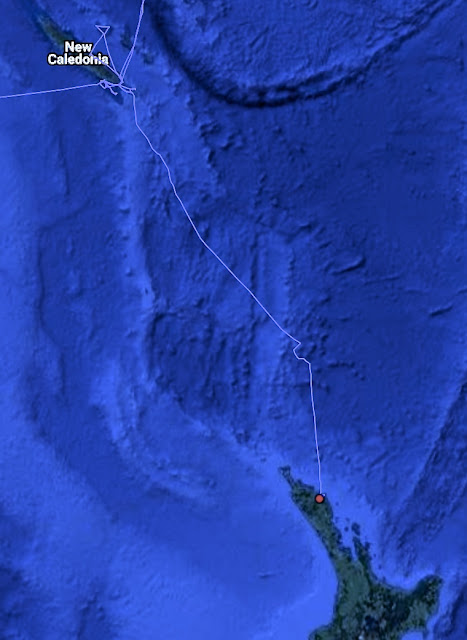 This next sequence of images shows how the prevailing winds changed as a large high-pressure system moved from west to east and we sailed south. 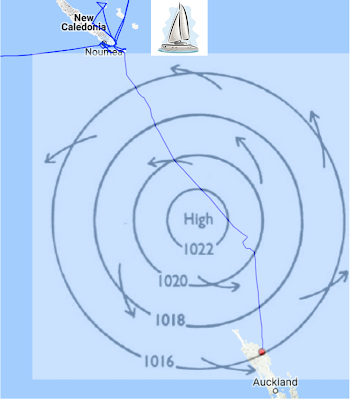 Day 1: In this photo the arrows show how the wind blows from the east, across the top of the high. Hence, we steered a southerly course after we left Noumea. 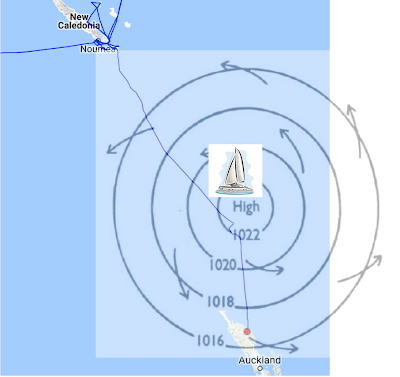 On Days 2 and 3, the wind veered more to the north-east, and we were able to correct course to the southeast. The dog-leg in the middle was the result of passing through the eye of the high pressure system, and a brief southerly change before the system moved on. We had 12 hours of weaving back and forth to avoid taking the wind and swell head on, then everything stabilized and we were off again. 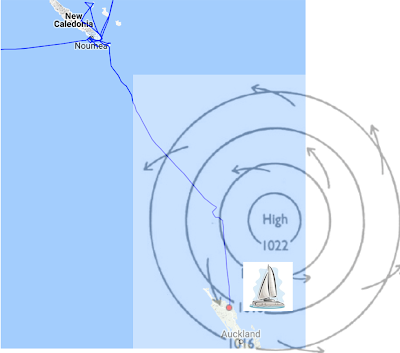 On Day 5, as we approached New Zealand, the wind swung completely behind us, picked up strength, and with the benefit of a following swell, we raced down to Opua at around 14 knots.


The website www.windyty.com shows how wind and swell develop as a high or low pressure system moves through a region. 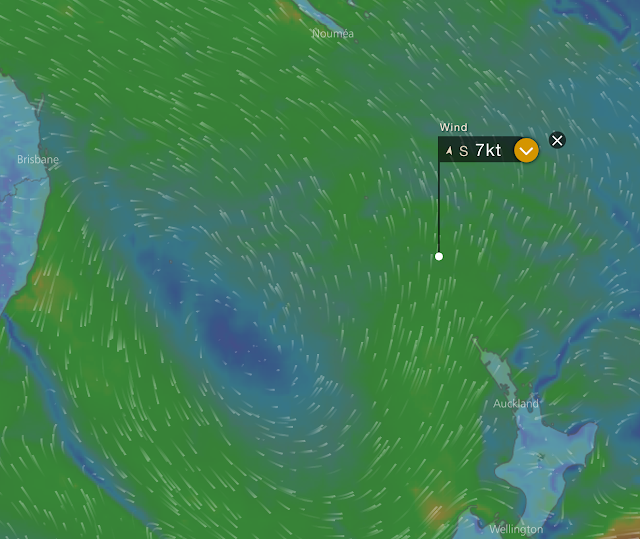 We were in a race to get to Opua before the next front, which heralded an impending low pressure system. After travelling over 5000 miles in the last two cruising seasons, we now have a good idea of how many miles we cover in an average day, and are able to plan our trips far more accurately. We were not concerned about whether we would get to New Zealand in time, we just knew we had to keep moving.

With a favourable wind and New Zealand almost in our sights, it was tempting to relax. However, close encounter with one of the Pacific ocean's most curious denizens reminded us that we should always be alert.

It was 9 pm on the first night of the 2014 Sydney to Hobart race when one of the favourites, Perpetual Loyal, crashed into a solid object where the charts said there was nothing but open ocean. The 30 metre maxi yacht was forced to retire from the race and limp home with major damage. Six years before, the 2 million dollar yacht, Georgia, actually sank after a similar collision in the same race. Two more racing yachts, Wild Oats and Skandia have also fallen foul of the creature in recent years.
This treacherous kraken of the waters around Australia and New Zealand is the Ocean sunfish (Mola mola).
I was on watch in the afternoon as we sped towards our destination. It was sunny, and the sun was spearing through clear blue water when I saw the fin. At first I thought it was a shark.

But as we sped past, the huge creature turned over, flashing it's white side, and slid into the depths.
"A sunfish!" I said to George and Simon, who both saw this amazing creature as we left it in our wake. It was there and gone in a few seconds.
The Ocean sunfish is the planet's heaviest bony fish (sharks are cartilaginous fish so have their own record book). Sunfish can grow up to 1000 kg and 2 metres across. They dive down to feed on small fish, crustaceans, jellyfish and squid, then return to the surface to bask before their next dive. They are harmless to people, unless you happen to run into one. A racing skipper was quoted  as saying they saw a sunfish every 15 minutes or so, so who knows how many we passed that we did not see.

New Zealand customs require notification of your intended arrival date and time at least 72 hours in advance. We emailed all our details from Noumea before we left. As it turned out, we got there a day before expected, because of our very fast final leg. This photo of the navigation table shows me preparing arrival documents as we surf towards the north island. 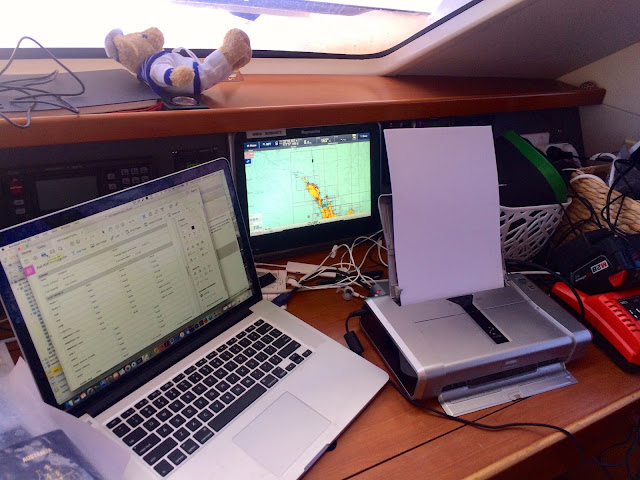 The ride was a little animated, as demonstrated by Jack Tar, our mascot. 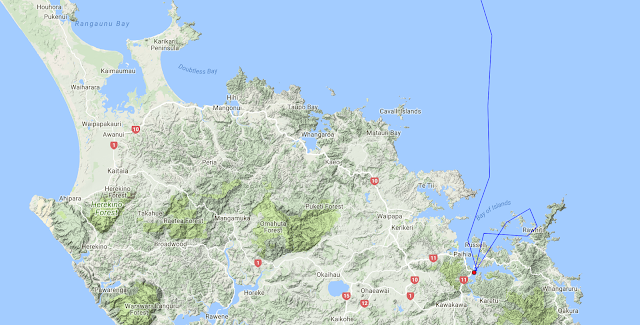 We arrived in Opua in a rain squall around 4 am. We dropped anchor and had a few hours sleep before moving to the customs dock. We had made it! 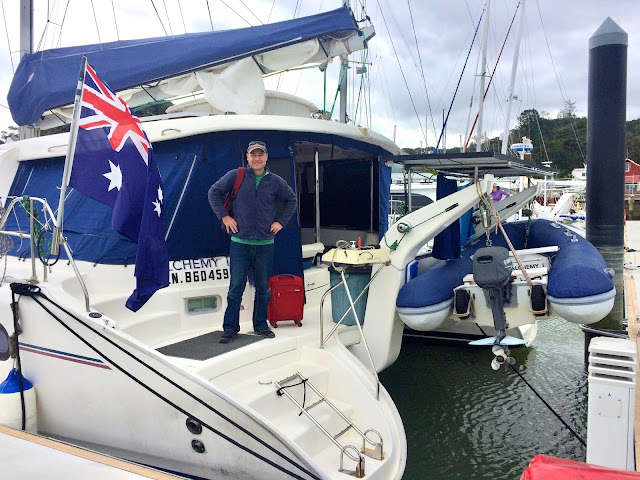 Rod stayed with us for a few days to get a taste of the Bay of Islands, and help with some maintenance.

Then a cruise around the bay.

And a little fishing for snapper and kawahai (also known as Australian salmon) as the sun went down. 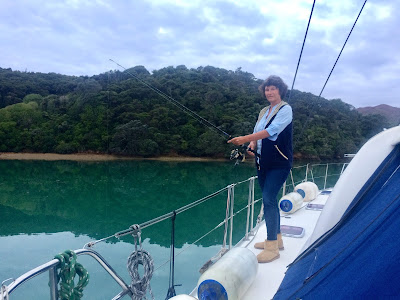 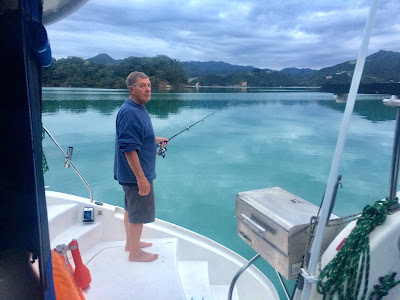 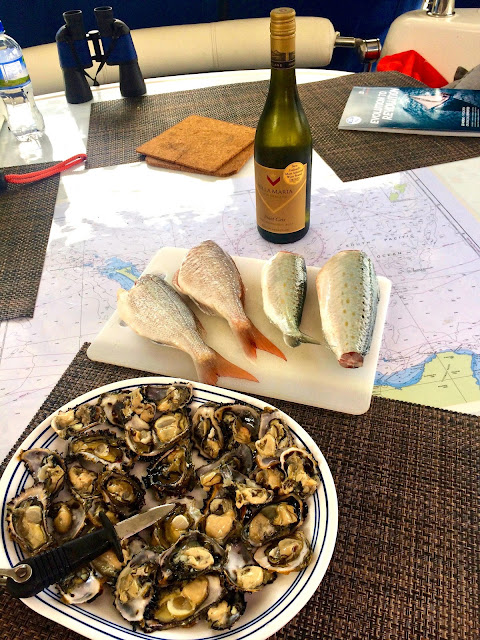 Now we are looking forward to five months in and around the Bay of Islands, where we will do more exploring and welcome many of our family and friends.