The Crossing: Brisbane to Noumea 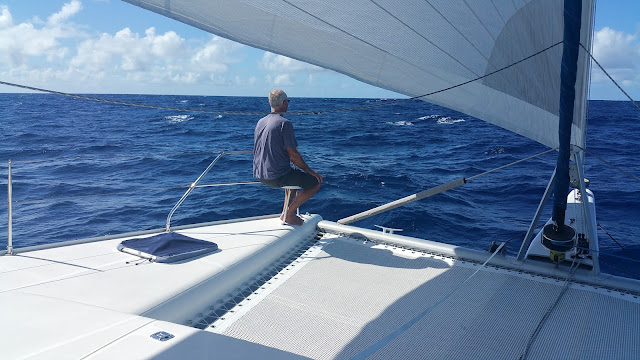 In June, the annual yaching migration was in full force. We watched our friends depart Manly, QLD for exotic locations. Boats lined up to cross the Wide Bay Bar for the journey to the Whitsundays and beyond. The "Go East" Rally left Southport; a flotilla of 20 plus yachts heading for New Caledonia and Vanuatu.
Alchemy 1, too, was finally heading offshore after her extensive refit and shake-down voyages. Her bow sprit had been repaired after the Lord Howe Island mishap. It would take the better part of five days to reach New Caledonia and our departure was dependent, almost entirely, on the weather.
Our crew for the voyage to Noumea (Bill and Simon) were on-call, waiting for news that a weather-window was opening.
We needed a rather particular type of weather. Catamaran cruising is all about sailing downwind - or at least trying to avoid sailing into a wind that is less than 60 degrees off the bow. Not only are catamarans not designed for sailing close to the wind, but it usually means you are also sailing directly into the swell, which can be most uncomfortable. So we were looking for a weather pattern that would give us a wind direction on the beam (side) or aft (behind), not too much wind so we would not have to worry about the sails being overpowered, and hopefully also a swell that wasn't too huge.

Here you can see a sailable wind angle (but a little too much wind for full sail). Alchemy can sail very well at this angle, but it can be a rough ride into the swell. 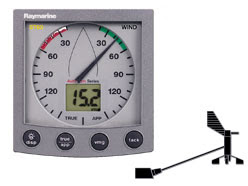 Here we have a perfect wind strength (15.2 knots) but a wind angle that's on the nose, making for uncomfortable cruising conditions. 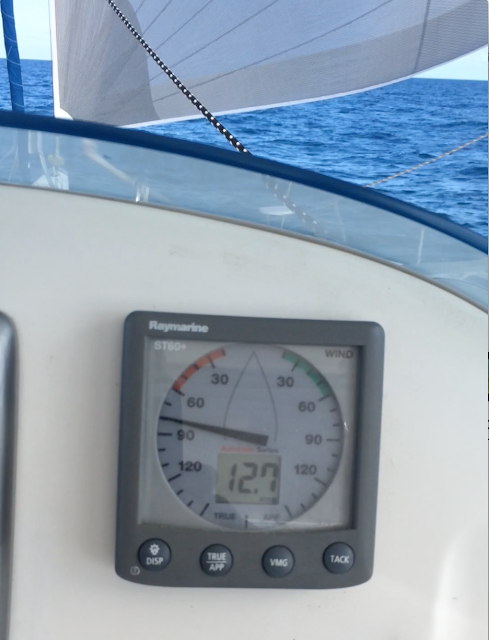 Here is a much better wind angle, from our trip to Great Keppell Island, but our ideal is at least 15 to 20 knots on the beam (90 degrees), at which stage we can sail around 9.5 to 10 knots very comfortably, and faster if the sea is calm.

A low pressure system has (by definition) a low pressure core that sucks wind into its center and sends it skywards (which also creates clouds and often rain). As the core pressure within the system drops lower and lower it intensifies (as does the wind strength) until it becomes a cyclone.

A high pressure system is also called an  anti-cyclone, because the winds rotate the other way. You can imagine that if you planned to sail your catamaran to Noumea, you would either want a high-pressure system that hung around for 5 days, delivering a nice southerly or sou-easter, or a low pressure system that would sweep you across the top as it moved east.

Low pressure systems are a bit like colds - you never know quite how bad it's going to get, which is why a high is usually preferable to a low. We got the low. Not as intense as this one below, but one that looked quite like it. It was forecast to move slowly towards New Zealand without ever getting too strong or scary, giving us following winds (and more importantly following seas) for the whole trip, but who knew how fast it would move or in what direction, or whether it would intensify? 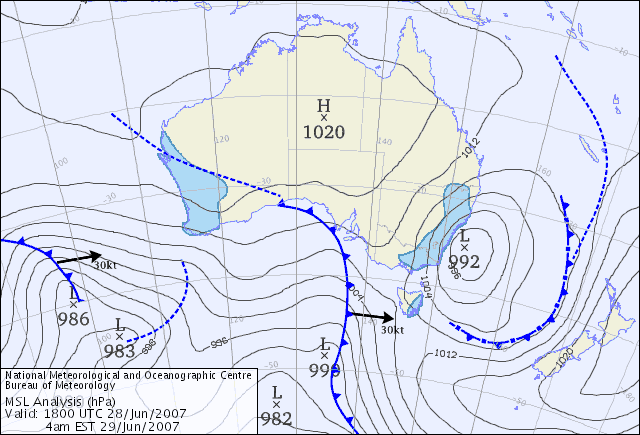 We use a weather forecasting system called Predictwind, which creates colour-coded charts to tell us what the wind and swell is likely to be doing at different times during our trip. We can also tell it when we plan to leave, what our boat speed is, and what conditions we would like to avoid (40 knot winds, 4 metre seas) and it will plot a course for us. 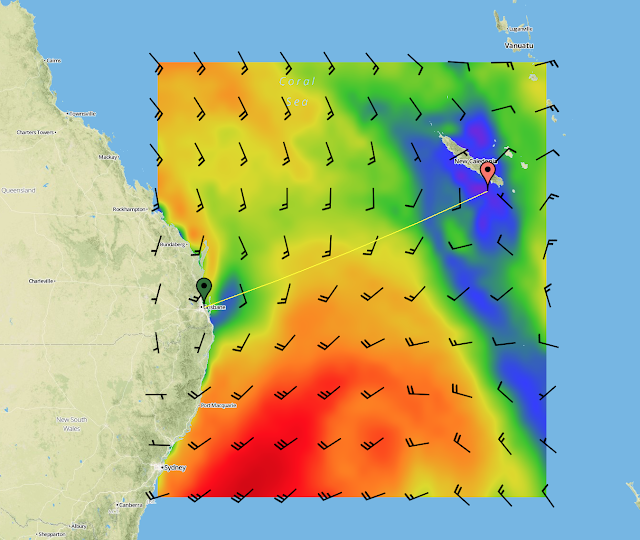 This a GRIB file that shows wind arrows and also a colour-coded chart of wind speeds. The arrow points in the direction the wind is going, and the number of barbs indicate the wind strength. One barb is 10 knots, 2 barbs 20 knots, etc. We were looking at a following wind of 15 to 20 knots. Perfect. Now for the swell. 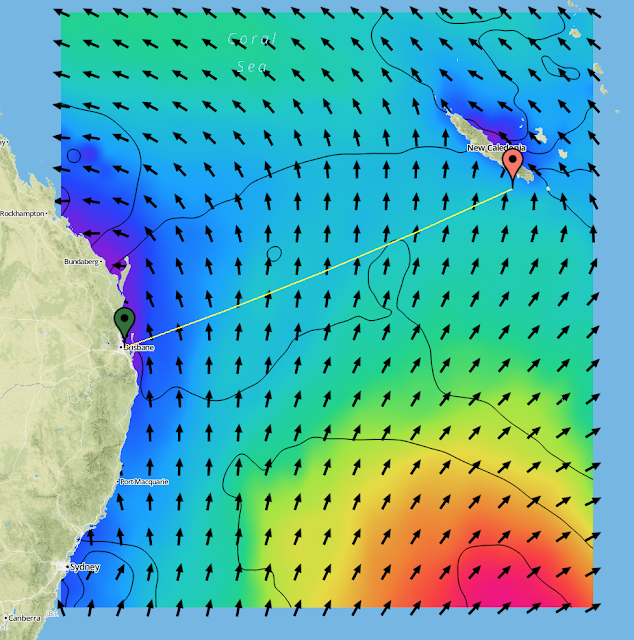 This chart shows swell direction, with a colour-coded map of swell height. It is simple; purple and blue good, red bad. The big red splotch (5 metres or 16 feet) in the center of the low pressure system was forecast to intensify in the south, but spread north as the low travelled east. We should have swells less than 3 metres if we made good time, but if we hung around in the middle of the ocean for a day or so longer than we needed to, the red splotch would catch us up. But Alchemy 1 is fast and as long as we kept moving at 7.5 knots or better, we would be able to stay ahead of the sea. The decision was made; this was our weather window for better or for worse; and Bill and Simon booked their flights.

Because it is always good to get a second opinion, we engaged a legendary weather forecaster and sailor from New Zealand, "Met Bob", to prepare a voyage forecast for us. He suggested we start a day earlier (to stay ahead of the sea) and track further north to avoid strong winds, high seas and also make use of a current flowing between two seamounts. He sent us a chart that included a recommended track, GPS waypoints and compass bearings for the different legs of the journey.

Two Australian Customs officers came to the boat in Manly, QLD on a Friday afternoon to check us out, we anchored offshore that night, and at first light the next day, we were on our way. 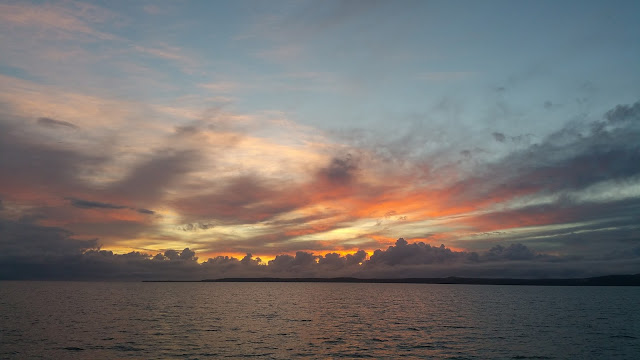 Because we were heading north for the first two and a half days, we set course for the top of Moreton Island, and then out to sea. 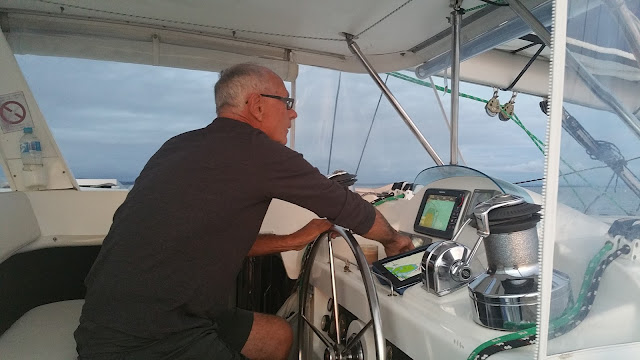 Predictwind, and our satellite phone system, Iridium-GO!, team together to offer an automated tracking system that allows family and friends to see where we are. There are no secrets ... 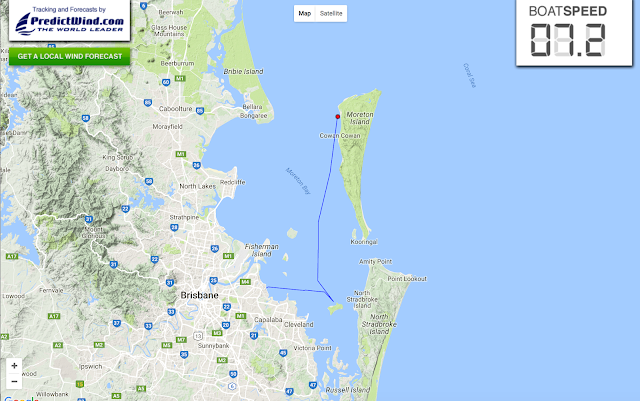 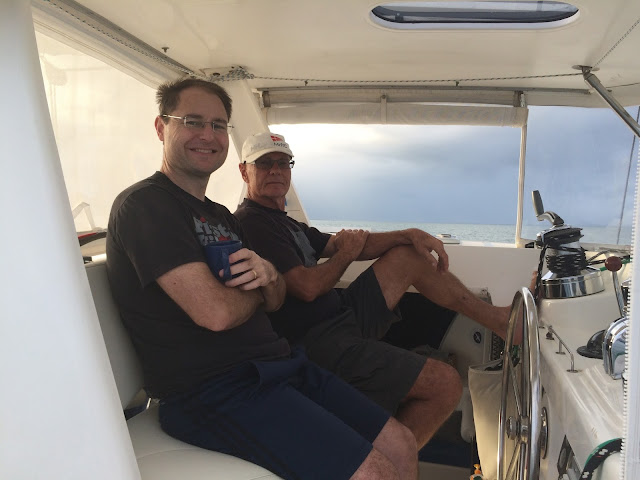 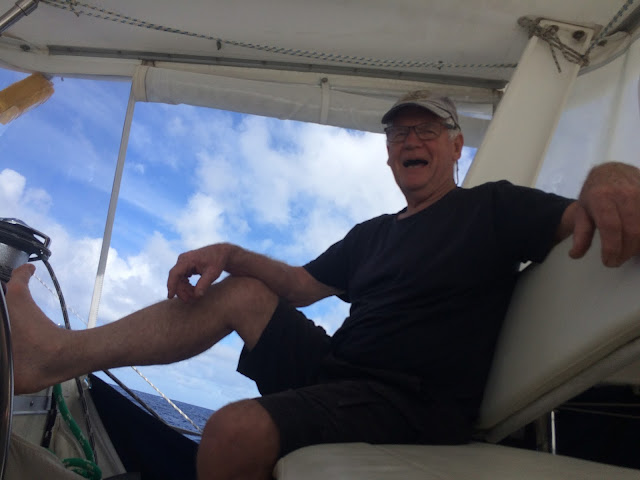 The Australian coast slipped behind us, and we were at sea. We organised 2-hour watches throughout the day and night; with 4 crew that meant we had 2 hours on and 6 hours off, very workable, and we kept the same watches for the whole 5 days to allow us to get into some form of routine. We had lunch and dinner together but organised morning coffee and breakfast around our individual schedules. The first day was easy; very little swell, but sadly very little wind either. Leaving a day early meant we had to wait for the low pressure system to catch us up. The sea was calm but getting a little lumpier as the sun sank slowly in the west. 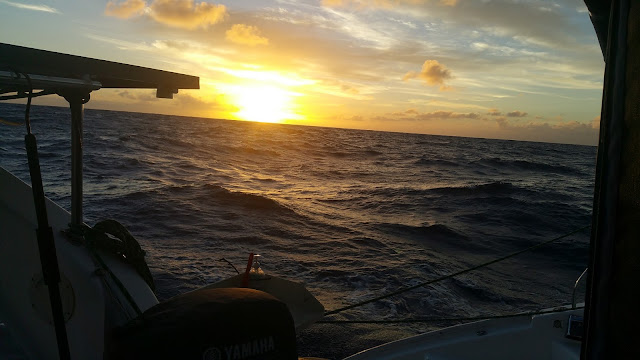 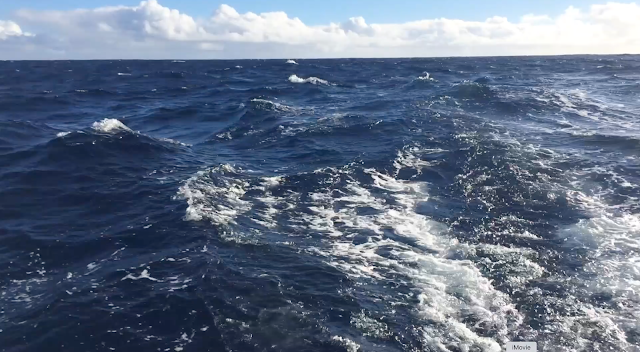 Dawn the next morning brought a little more swell, and a lot more wind. 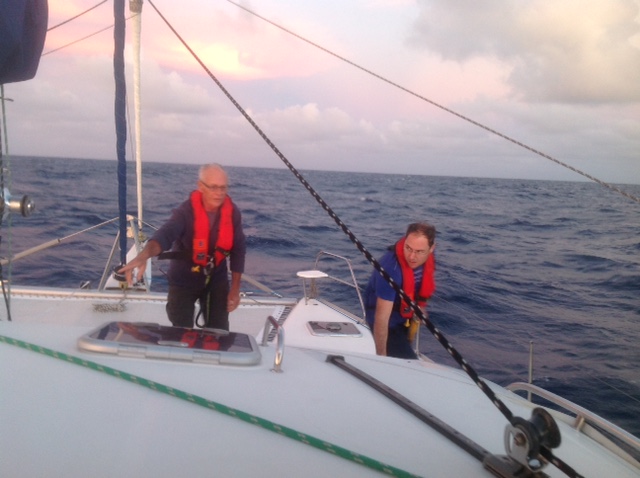 We put our sails up but fairly quickly had to reef the main as the wind rose to 25 knots. It was a little un-nerving, because we weren't sailing all that fast (only about 6.5 knots as the red dot will have testified to anyone who was watching), and we knew the low pressure system was marching inexorably up behind us. We trimmed our sails and waited for the conditions to intensify ... 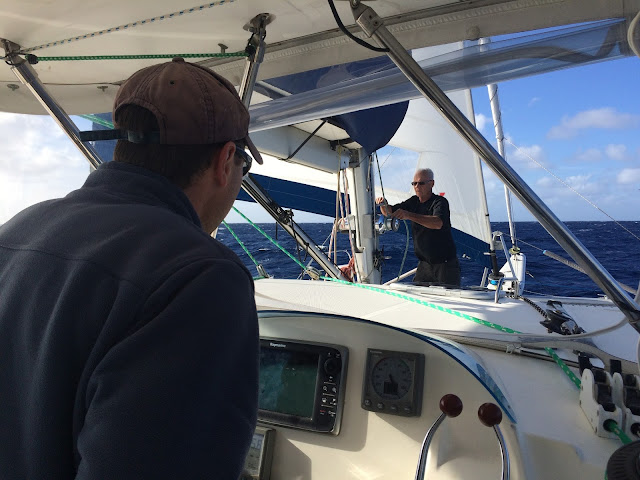 But they did not. Our northerly track (recommended by Met Bob) kept us away from the heavier weather.

My favourites are the night watches. You have the boat to yourself while your crew mates sleep (or try to sleep below). There is no light apart from the stars and moon, and the glow from your instrument panels. You put your ear plugs in and choose the most atmospheric album from your playlist. On this night, with the full moon rising and laying a silver path to the horizon, it was Jeff Wayne's "War of the Worlds".


By day 3, everyone was settling in to their routine. Nothing (and nobody) was broken and we rotated through our watches, read books, caught a couple of hours sleep when we could (by now we were motor-sailing to keep our speed up so we alternated engines so the person off-watch had a little less noise coming through their bunk). In the late afternoon of the third day, we reached the waypoint between the Argo seamounts and made our turn to the east. 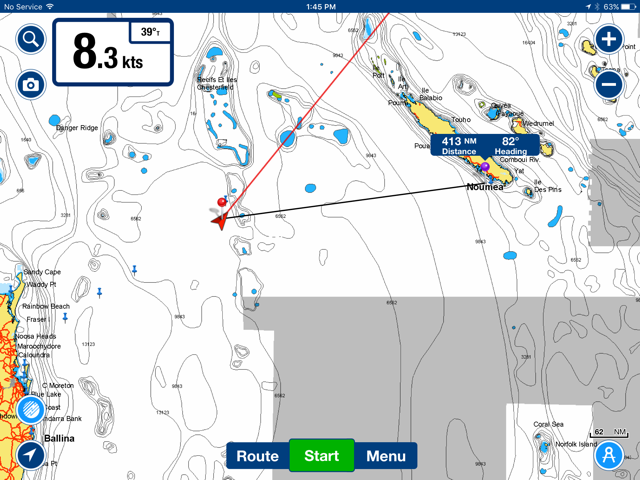 Sunset saw us pick up speed as we were swept along with the easterly current, as indicated by the red arrow on this image from Windy TY Website.

The next day, the swell was directly behind us and pushed us along. Every so often a larger wave would pick us up and we surfed down the front. You could feel the boat accelerate; it was exhilerating. The wind dropped (perhaps we had gone too far north to avoid the swell). It was also coming from almost directly behind, so the large mainsail was not very useful as it shielded the headsails. We tried various sets, including "goose-winging" where you put the two headsails out on different sides. 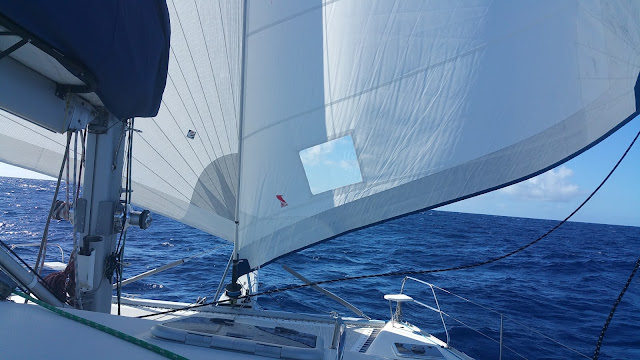 Sometimes "Goose-winging" requires a human pole - but only when the conditions are very calm! 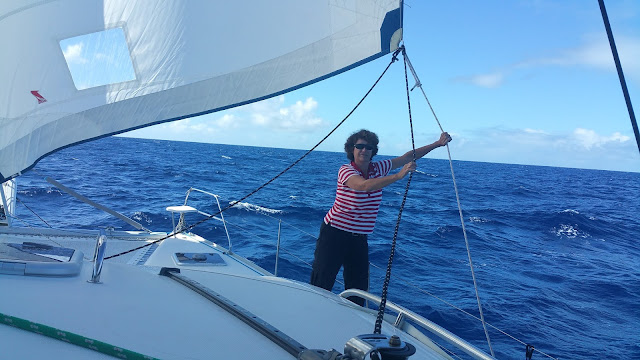 And on the fifth day, the wind dropped out, the gentle swell rolled in from behind, helping us along, and with Noumea almost in sight we simply enjoyed the day. We put out a fishing line and skirted rain showers. 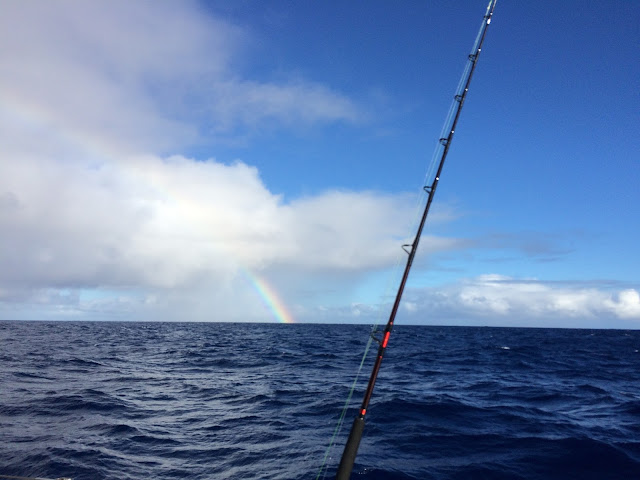 Before too long the fishing rod paid off and Simon had hauled in a nice Wahoo. 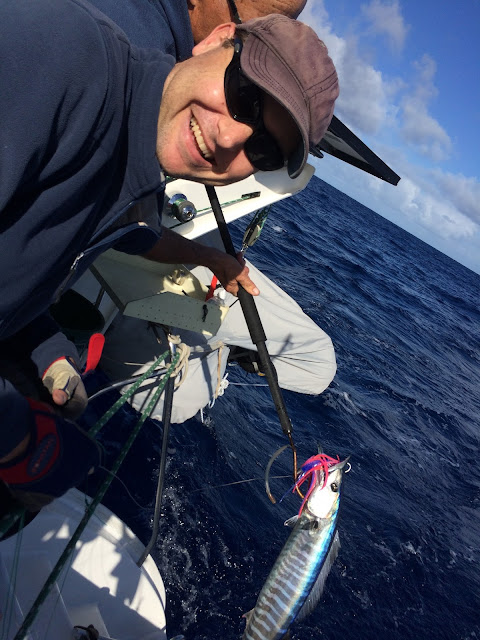 George filleted it, we rolled it in breadcrumbs and pan-fried it, David Beer-style, and sat down to the freshest lunch possible. We weren't quite finished when the fishing line sprang taut again. What did we have this time? 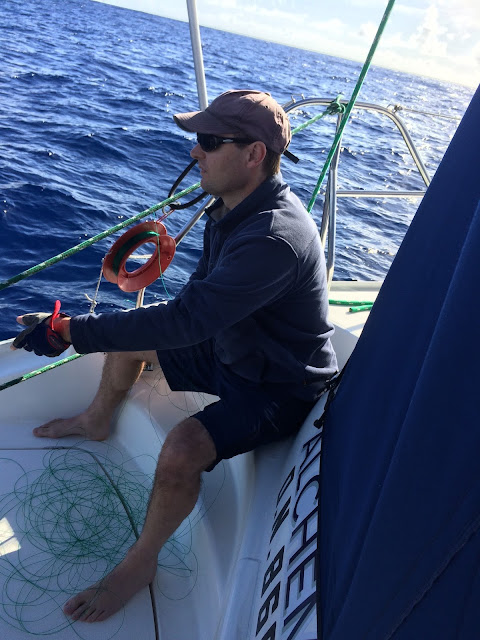 Simon began the hard work of hauling in what was clearly a large fighting fish on a hand line.

But it was worth it. A Mahi Mahi! 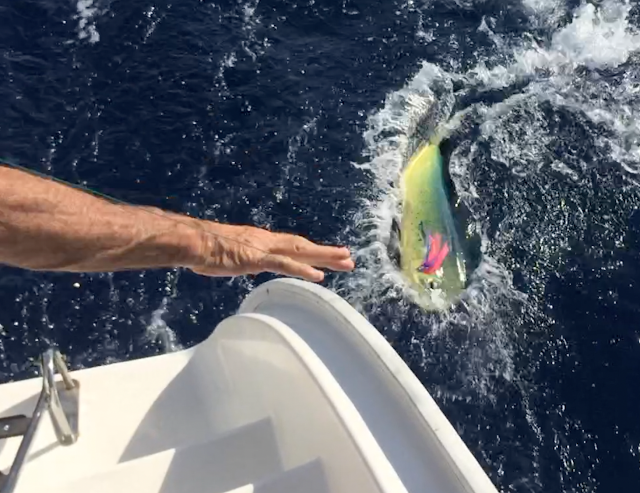 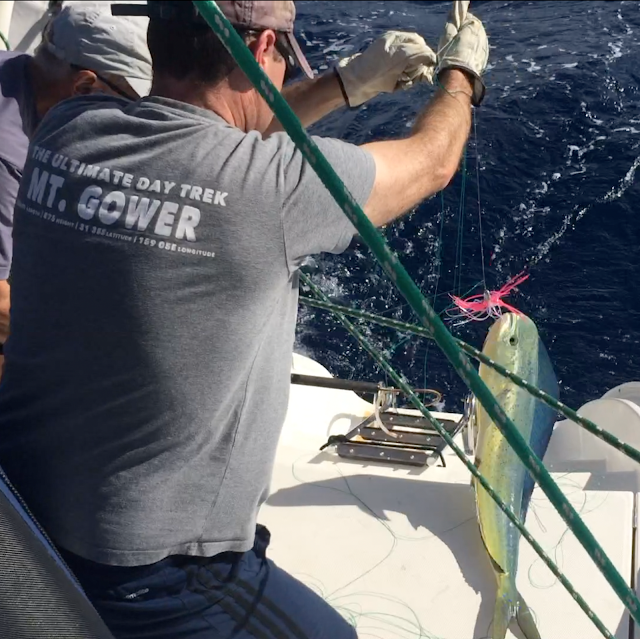 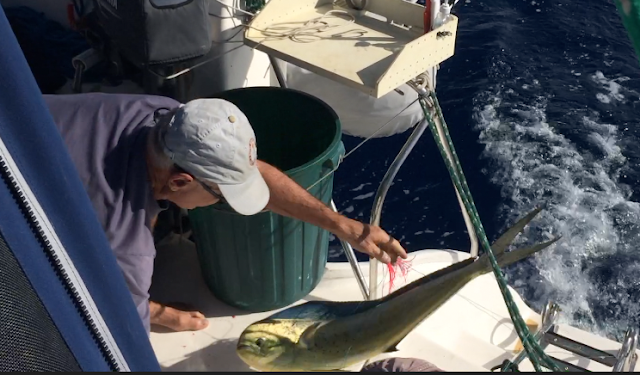 What a fabulous fighting fish it was. And supposedly such good eating.

It was hard to imagine, after the excitement of the fish, what else the ocean had in store for us, but it was not too long before we were joined by a pod of whales. Not the lumbering, flopping and slapping humpbacks, but sleek, fast whales that tracked along effortlessly next to us even though we were doing eight knots. Fin whales, or possibly Minkes. They were beside us and behind us and for a short while two of them actually swam under our back scoops, looking up at us and showing their fluorescent white bellies. Impossible to get a decent photograph, although we tried and have videos to prove it. Everyone was elated by this visitation from the deep. 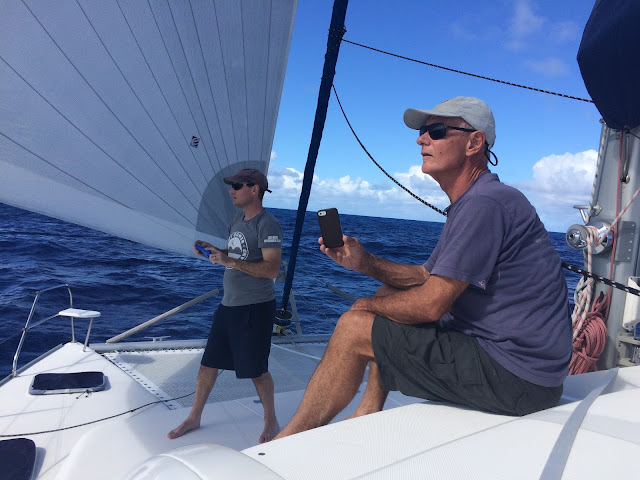 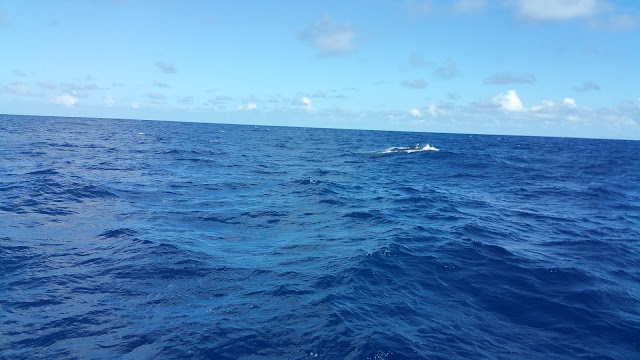 Noumea grew closer and eventually the mountains of Grand Terre rose from the horizon. We hoisted the yellow quarantine flag, and the courtesy tricoleur, and flew the Aussie flag out the back. 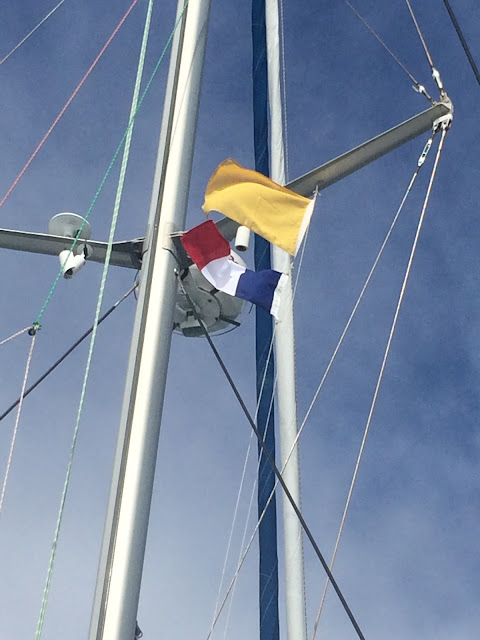 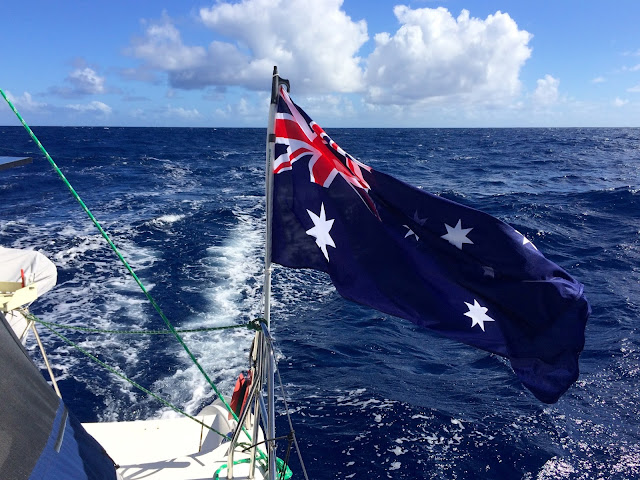 We would not enter the lagoon until many hours later, after the sun had set, but the end of our voyage was in sight. 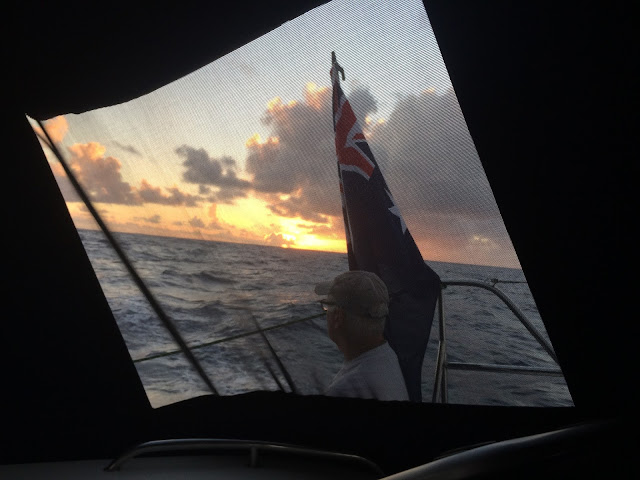 Thanks to some favourable weather, the smooth performance of the boat, and the help of our fabulous crew, we had arrived. 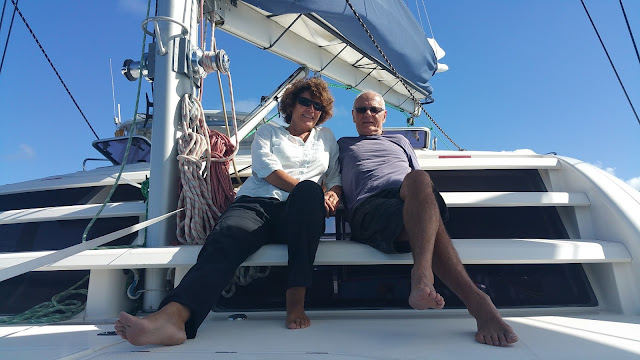