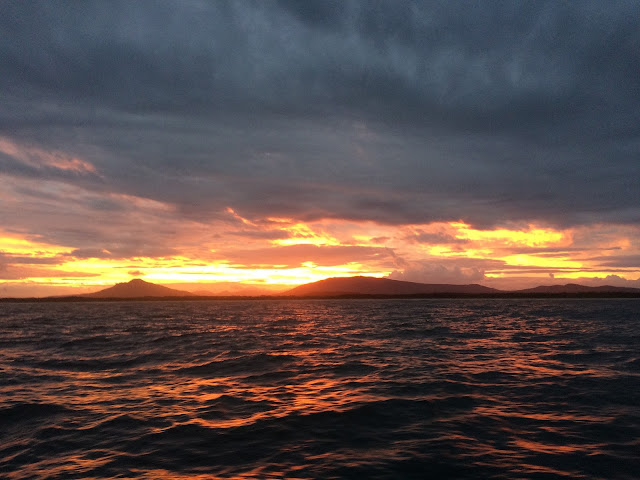 When in Lamen Bay, on the island of Epi in Vanuatu, you can be forgiven for thinking that the sun sets in the north. When the day fades into the western ocean and dusk deepens, the volcano of Ambrym appears as a red beacon, illuminating the underside of clouds that hover almost permanently above its caldera.


Once our trusty crew departed after the crossing from Brisbane to Noumea, George and I quickly found a weather window for the 350 odd nautical mile trip to Port Vila. Eighteen to 20 knot sou-easters right on the beam, seas less than 1.5 metres and coming from behind. We put a reef in the mainsail, pulled out the genoa and, at 9 knots, travelled over 200 miles in a single day. This was our first overnight passage as a team of two, and we did 3 hour shifts around the clock. Although the seas were slight, it was my first introduction to the south pacific "slop" where differently oriented swells compete with strong ocean currents and the sea is then whipped by the wind to an uncomfortable state resembling the agitate cycle in a washing machine. You can see this in the photograph above.


The slop seems to arise from the confounding influences of mountainous islands, strong trade winds, and the fact that the oceanic fault lines of the Pacific's Ring of Fire run straight through Vanuatu. If you ever wanted proof that wind, tide and geography interact with one another, come spend a day or two beating through the end-result!


Now, upon entering Vanuatu one of the first things one must do is get used to reading a foreign language. Many Vanuatu people speak English, some speak French, but Bislama is pretty much universal, even though Vanuatu has over 100 dialects (the highest per capita in the world, and second only to New Guinea). Bislama is a form of pidgin English that is surprisingly easy to understand once you've got over the fact that many of the words do not appear in the Oxford Dictionary. Back to the title of this blog; Faea blong bigfella hill. Say it out loud and you will realise it says "fire belonging to bigfella (large) hill". Mountain fire. That is, an erupting volcano. The term bigfella is quite versatile. George ordered a bigfella hamburger in Santo and what arrived was surely designed to turn a man into a bigfella if he was not already.

So this is the stori of the taem Geraldine and man blong Geraldine (ie, George) sailed hemi waet sip, Alchemy 1, (really just a bigfella bot) to Port Vila and beyond. 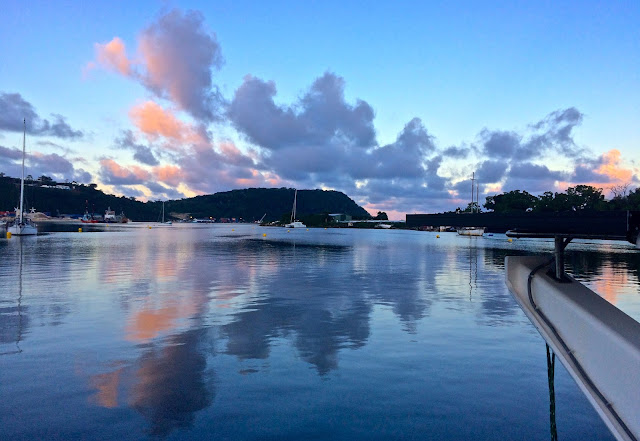 After we arrived and cleared customs, we took a mooring at "Yachting World", which allowed us a good night's sleep and access to shore for some important things like a welcome drink (Tusker Beer), and a visit to "Vila Distributions" which had the best range in French wine this side of the International date line. 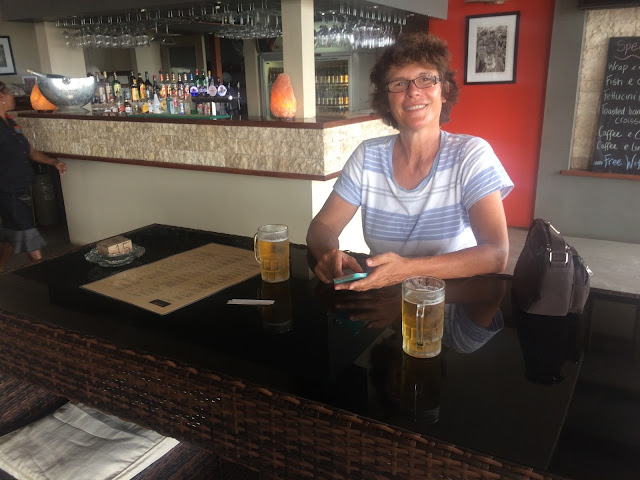 Thus provisioned, we felt confident to set off for the northern islands. Our first stop was Port Havannah, where we were reminded that the insurance companies want you out of Vanuatu by late November for a reason, and even super-yachts are not immune to a cyclone like Yasi, Pam or Donna.

This was the first of many wrecks we saw in Vanuatu, a sobering reminder that boats and reefs do not mix well, and even worse when a strong wind is blowing.


The other thing we were to discover was that the nautical charts, while highly accurate in New Caledonia and studiously overcautious in Australia, were up to 100 metres out in Vanuatu. The island below had a sneaky little reef projecting from its western shore that is quite obvious on a Google Earth image, but doesn't rate a mention on the charts. 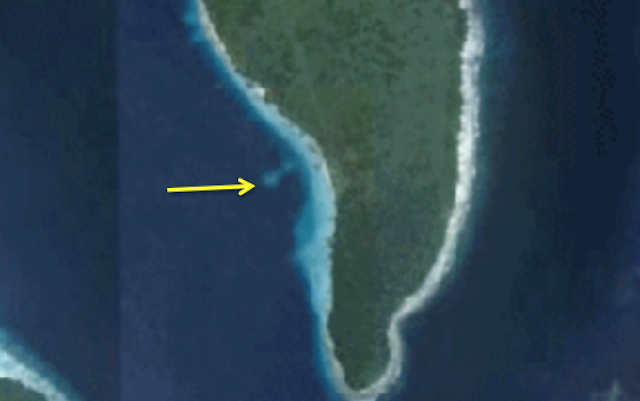 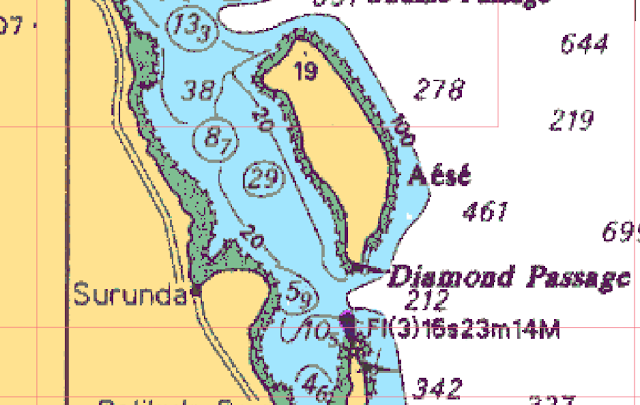 Once we changed course to avoid running aground, we found it was a nice little reef, where we had a pleasant dive and George speared the only fish of the trip; a fat coral trout. This island was uninhabited, which had presumably spared the surrounding ocean and its fish population.

We were sad to find that most of the reefs and waters of Vanuatu are seriously over-fished. The villagers are making a living from the sea and from the land, but an increase in population and pressure from illegal fishing by the Chinese amongst others means that the catch is diminishing; and instead of mackerel and coral trout, the locals are forced to eat butterfly fish and the other small species that survive when apex predators disappear.

From Vila, we sailed north to Port Havannah, a quiet and sheltered anchorage at the head of a long bay. There we had our first encounters with the locals (Ni-Vanuatu) who were very welcoming and keen to trade fruit and vegetables for luxuries like batteries, long-life milk and sunglasses. 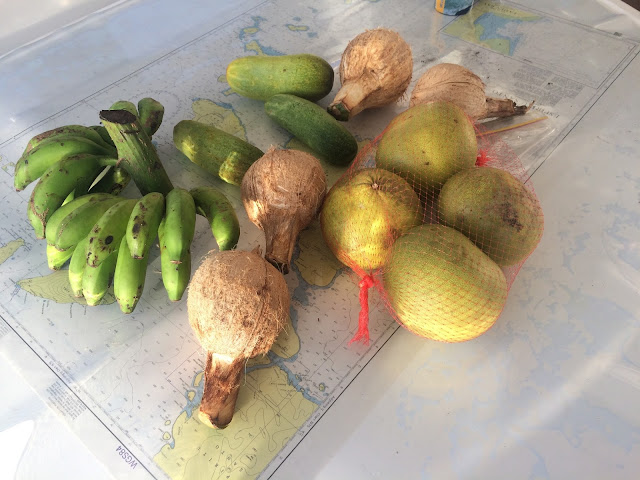 The grapefruit (pumplemousse) were huge, with sweet red flesh, the coconuts were young and tender and made great coconut milk. Likewise, the bananas were very tasty and magically did not all ripen at once. 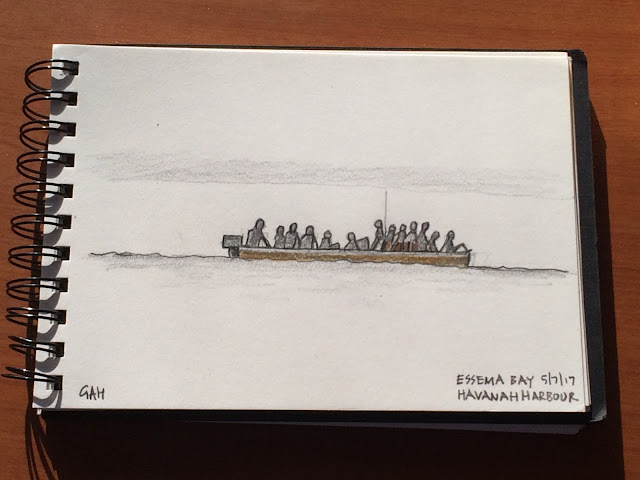 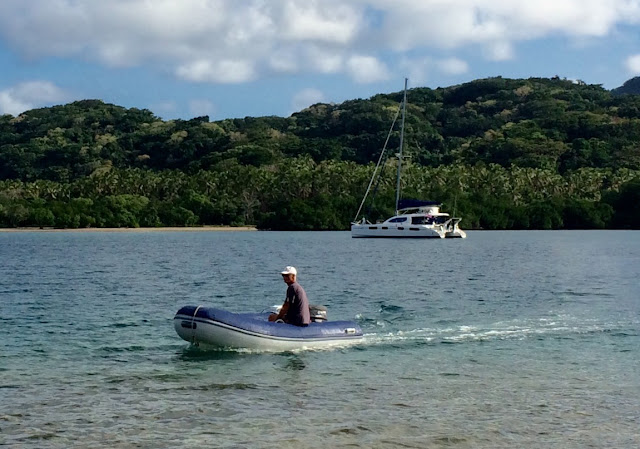 We went ashore one afternoon and met Kennet (the "h" is silent in Bislama). Kennet needed help with his outboard engine, and all of a sudden George had a project! 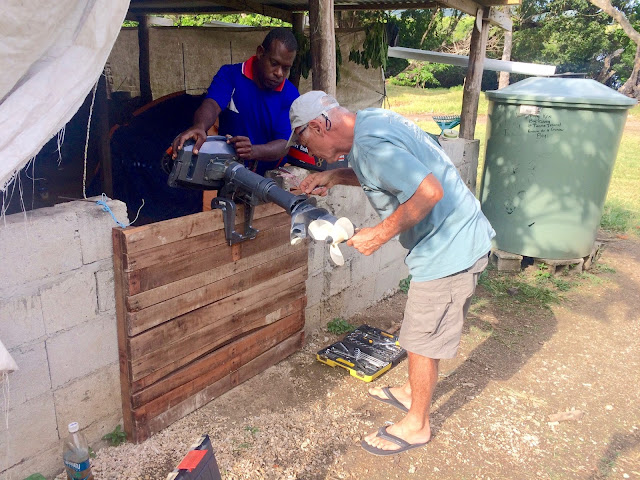 The project ended up taking two days, during which time George learned a lot more about Kennet and his family, and decided to donate a tool kit to the village, so Kennet could learn more about engine mechanics and they could do their own repairs in the future. There was great interest as George unveiled the tool kit. 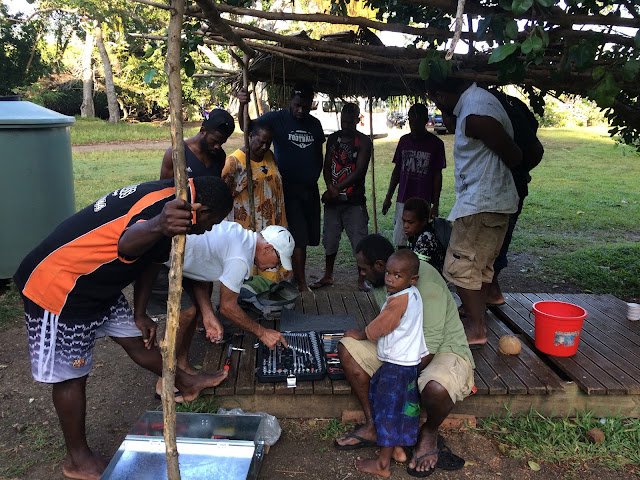 Kennet's uncle was an officer with Port Vila immigration, and helped fast-track our clearance from the country when the time came to return to Noumea.

From Port Havannah it was north again to Lamen Bay, an idyllic anchorage that we had completely to ourselves for our first visit. 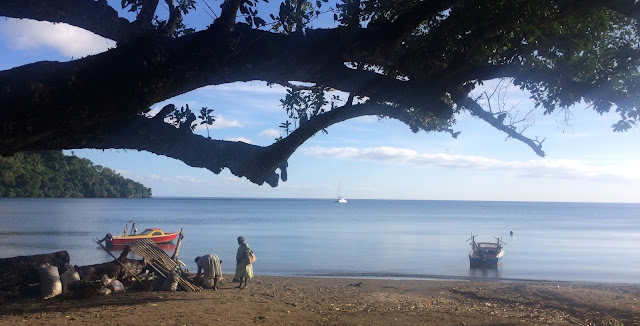 At Lamen Bay, I sighted my first dugong, feeding on the sea grass at the southern end of the bay. The dugong is protected in Vanuatu and recognised as an important tourist attraction. It is hard to get photos of them as they only surface intermittently and take a couple of breaths, before diving again. They do, however, flick their tail up in the air as they dive (their tail is very like a dolphin's), which is the time they are most likely to be sighted. 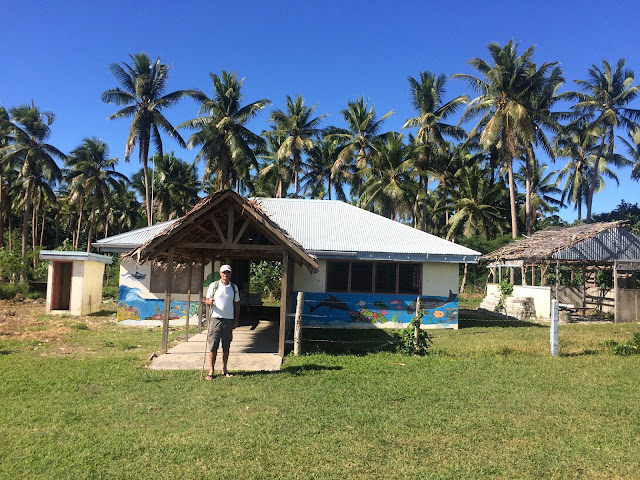 The main welcoming committee when we sailed into Lamen Bay were the resident pod of spinner dolphins, who showed us to our anchorage and entertained us for three days as they fed and played in the lagoon.
We returned again to Lamen Bay at the end of the trip, but by then the cruising season was in full force and with 6 yachts anchored in the bay there was no sign of either the dugongs or the dolphins.